Karachi, March 08, 2016: e2e SCM recently commenced a tree plantation drive as an extension of the ‘Give Green’ campaign in The Citizens Foundation (TCF) Schools, with the purpose of instilling the importance of tree plantation in children for a green environment. This initiative was launched at the TCF Garden West Secondary School, Karachi where students participated with great zeal and zest. With participation from other like-minded organizations this project can further grow on a national level. 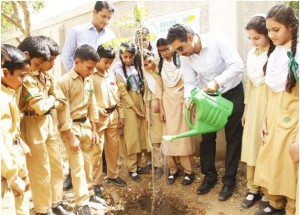 This idea is part of the second phase of the ‘Give Green’ Campaign. It aims at creating awareness in the society regarding the utmost need of developing a sustainable environment for the coming generations. This tree plantation drive will focus on Karachi based TCF schools after which it will expand further to other locations. The guest speaker, a renowned horticulturist, Mr. Tofiq Pasha Mooraj highlighted the significance of trees and their impact on the eco-system, meanwhile, Founder and CEO e2e, Mr. Abid Butt, and VP – Inputs TCF, Mr. Zia Abbas appreciated the keen interest shown by the school children.

“Having trees is the primitive need of the society and an important part of the eco system, the lack of which is triggering undeniably adverse environmental impacts, Karachi’s heat wave last year being one of them,” said Mr. Abid, “We therefore openly invite the logistics companies to collaborate for ‘Give Green’ sustainable development of Pakistan and encourage other stakeholders to form a consortium for this cause. Together we can increase the aim of planting 60,000 trees to even 6 million as we foresee a massive potential towards bringing this positive change.”

Mr. Zia expressed his gratitude at TCF being selected for this notable cause. “We are very grateful to e2e for keeping our schools the focus of their tree plantation drive. Teaching kids the importance of tree plantation will help them grow up to be citizens who care for the environment. We hope that other schools will follow suit and inculcate this important habit among young children.” Said Mr. Zia

Some associated activities conducted as part of the Give Green campaign comprised of a drawing competition which received a wonderful response from the students. Winners were selected and awarded with trophies and medals along with all participants receiving certificates. A For-Profit Social Enterprise, Team Muhafiz as a sign of their goodwill gesture collaborated on the event by donating comics which revolve around the concept creating awareness regarding deforestation.

The first phase of ‘Give Green’ took place on the World Environment Day, on June 05, 2015, and acquired massive participation given the enthusiasm of volunteers. The plantation drive was conducted in Defense Phase 7, Karachi in collaboration with Cantonment Board Clifton (CBC) and Charter for Compassion. According to e2e’s Vision 2020, the company plans to plant 60,000 trees by 2020 with the aim to off-setting carbon emissions in the country.

According to e2e, the idea is beyond tree plantation and aimed at the greater cause of making the environment friendly and worth living in while having a decent number of tree planted would bear fruits for decades to come.