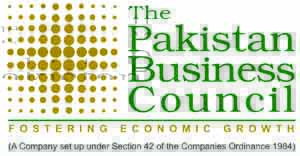 Karachi, April 17, 2013: The Pakistan Economic Forum, a consultative body on the model of the World Economic Forum, sponsored by the Pakistan Business Council, organized its second session today to present the draft recommendations of its 6 expert panels on critical issues facing the country. The panels comprising of eminent persons and subject experts identified the 6 most serious challenges as education, energy, macroeconomic stability, regional trade, social protection and water.

PBC members, key stakeholders, members of the media and others present participated in the discussion following each panel’s presentation and shared their views which the PEF will now incorporate into its final recommendations to be presented to the major political parties and other stakeholders, and to the new government, post-elections. Through its efforts, the PEF aims to stimulate a wider debate on critical issues and challenges facing the country, with a view to evolving a national consensus on policies to successfully manage these issues.

The day long PEF-II witnessed the gathering of the most prominent corporate leaders and socio-economic experts of the country, who heard the PEF panels’ thoroughly researched and in-depth analysis of issues posing a serious and long-term threat to the stability and progress of Pakistan. The day started with an impassioned speech by Sikandar Mustafa Khan, Chairman PBC, who set the tone for the day by pointing out that Pakistan, with all the potential to become a high-growth country, is fast approaching a critical point beyond which recovery would become almost impossible, and the time for taking drastic remedial measures is right now.

Following his speech the first presentation was given by the Education Panel chaired by Dr. Shamsh Kassim Lakha, with the key message that one out of every ten children out of school around the world is from Pakistan. He stated that the country urgently requires policy reforms that would not only increase access to education but also improve the standard and quality of education at all levels. He further stated that the future success of the country’s economy is critically dependent on the quality of its human capital- education budget must increase from 2% to 5% of GDP over the next five years.

In the second panel presentation on Water, it was pointed out that Pakistan is lingering just above the water scarcity limit of 1,000 cubic meters per capita. With Pakistan’s burgeoning population, water is required for consumption, agriculture and industries. Urgent measures are required to ensure the most efficient use of water resources to avoid a detrimental crisis in the mid-term.

The Energy Panel chaired by Farooq Rahmatullah stated that the energy crisis has retarded Pakistan’s GDP growth rate by 3%- 4% in the last few years, and also deterred any substantial local and foreign investments in the country. With the current energy projections, by 2030, energy demand in Pakistan is estimated to be almost 64% greater than projected supply. The Panel recommended that a Ministry of Energy must be established which would be tasked to design an integrated energy plan. This plan would balance energy imports with the development of indigenous energy resources and aim for a diversified economic energy mix.

Dr. Asad Sayeed, chairing the Social Protection Panel pointed out that nearly half (49%) of Pakistan’s population lives in poverty today, with government spending on social protection recording less than 1% of GDP. In order to reduce poverty and inequality in the country, the Panel recommended that an efficient social protection policy should be implemented by the government that would above all, increase targeted subsidies (as opposed to general benefit) to at least 3% of GDP over the next 3 to 5 years.

The fifth presentation was by the Macroeconomic Panel, headed by ex-Governor State Bank of Pakistan, Dr. Ishrat Hussain. The Panel established that the macroeconomic environment remains depressing and the GDP growth rate in the last 4 years has been around 2.5%-3% only. The Panel stated that a chronically weak fiscal structure has fuelled high government borrowing and inflation, leading to a fiscal deficit of 8% (which must be reduced to 4%). This along with policy uncertainties and weak governance standards need to be urgently addressed if the GDP growth rate is to be sustained to at least 6%-7% in the next few years.

The final presentation was by the Regional Trade Panel, headed by Dr. Ijaz Nabi. The Panel stated that regional trade is the greatest opportunity for economic growth in Pakistan. Pakistan and India account for 90% of the South Asian regional GDP, yet bilateral trade between the two is well below potential. The Panel recommended that a strategic policy should be carefully developed for bilateral trade with India aiming to establish a level playing field for a sustained and equitable relationship. Trade with other regional countries also requires attention, the Panel concluded.

The Pakistan Economic Forum’s Second Session has taken on the major responsibility of not only identifying key issues retarding progress but has also formulated practical policy recommendations, which if taken up by the policy-makers will lay the foundation for a prosperous Pakistan in the coming years.