Emirates Doubles A380 Capacity to New York and Paris

New Year kicked off by second daily A380 services

KARACHI, January 01, 2013- Emirates has doubled its A380 capacity to New York’s John F. Kennedy and Paris’ Charles De Gaulle airports with a twice daily A380 service from Dubai now operating into both cities.

“The decision to commit a second A380 to both New York and Paris is a clear indication of customer demand, for the state-of-the-art aircraft and these two popular destinations,” said Thierry Antinori, Emirates’ Executive Vice President, Passenger Sales Worldwide. “New York and Paris are both important routes for Emirates and its customers. Adding larger capacity aircraft is central to helping us meet growing passenger demand and will also boost economic support for American and French international commerce.” 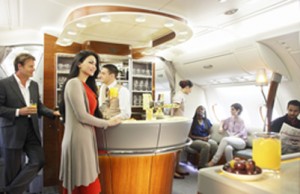 “New York & Paris both are very popular routes for business and leisure travellers from Pakistan” said Mr. Khalid Bardan, Emirates’ Vice President, Pakistan. “By adding this extra capacity on the routes from Dubai, Pakistani travellers now have even more opportunity to travel to these two destinations whilst experiencing the award-winning products and service offered onboard an Emirates A380.”

With the world’s largest fleet of A380 aircraft at 31 and another 59 on order, Emirates continues to set the pace for A380 deployment. In the four years since the Emirates A380 has been in operation over 11.5 million passengers have flown on the aircraft, covering 169 million kilometres. In 2012 alone, Emirates added 11 A380’s to its fleet.

“Emirates has redefined air travel and we look forward to offering the unique A380 experience to even more of our passengers on the Paris and New York routes with the exceptional and innovative features we offer on-board including the industry first Shower Spas, the First and Business Class On-Board lounge and an award-winning inflight system offering 1400 channels of on-demand entertainment. Combine this with our gourmet cuisine as well as a network spanning six continents, and you have a product which has become extremely popular with our global travellers.”

Despite its size at over 24 metres high and with a wing span of nearly 80 metres, the A380 is the quietest long range aircraft and uses the very latest fuel-efficient technology. Passengers in the First Class cabin can freshen up in one of two on-board Shower Spas before joining fellow premium class travellers in the On-Board Lounge where they can enjoy complimentary beverages and canapés.

The Emirates A380 fleet currently serves 21 destinations with new cities to be announced in the coming months. Emirates has the largest number of A380’s on order which will total 90 by 2017. In January 2013, the world’s first purpose-built facility for the Emirates A380 will open at Dubai International Airport, allowing faster boarding and smoother connections. From the direct boarding from the lounges for First Class and Business Class passengers, to the expanded duty free shopping, dining options from cafes to fine dining, a full service Timeless spa, two hotels and other amenities, the new concourse represents another first from Emirates in providing innovative products and services that give customers an unsurpassed travel experience.