Video: see what the Gatwick community thinks of Emirates’ A380 service

Karachi/DUBAI –April 01, 2014: Emirates, a global connector of people and places, launches its A380 service to Gatwick today representing a 15 percent capacity boost for the UK’s South East.
Emirates was the first carrier to operate an all-A380 service out of Heathrow and is now the first to lead the service out of Gatwick – the same airport from which Emirates flew its inaugural UK flight 26 years ago. 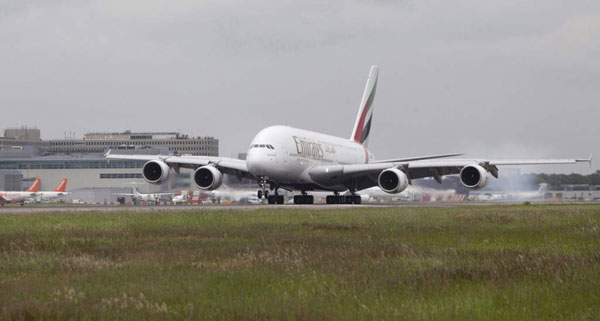 Speaking about the launch, Hubert Frach, Emirates Divisional Senior Vice President Commercial Operations West said: “Six years after launch the Emirates A380 is still a customer magnet. Airports the world over are eager to have the Emirates A380 on their roster and today’s launch to London Gatwick is representative of that demand.”

In order to become A380 compliant, London Gatwick has invested £6.4m in new facilities, including the widening of three runway rapid exit taxiways and modifications to taxiways between the runway and the stand.

Guy Stephenson, Chief Commercial Officer of London Gatwick, said: “The A380 is one of the modern marvels of aviation engineering and as such we have dedicated part of Gatwick’s £1billion investment in transforming its infrastructure, creating a stand designed specifically with the world’s largest aircraft in mind. We are pleased to welcome a scheduled A380 service with Emirates, an airline that Gatwick has a long history with.”

“Emirates and Gatwick have once again been working closely together in the shared goal of providing the best possible passenger experience,” added Mr Frach. “It is fitting that Gatwick’s renewed spirit of ambition, as symbolised in their modernisation programme of recent years, will now be joined by Emirates’ own symbol of ambition and connectivity, the world’s largest passenger jet. Now, more people in the South East of England will be able to connect to more destinations and that is great news for holidaymakers and business travellers alike.”

Emirates is a strategic investor in the UK employing over 700 staff, and contributing £260m into the economies of the six hubs that it operates to. The launch of this A380 has not only allowed Gatwick to invest, but also supports suppliers such as Alpha LSG, who are now tasked with producing over 1,000 additional meals each week.

The airline’s commitment to the A380 will also guarantee jobs at companies like AIM Aviation, a British company based in the South East that supplies furniture for the A380 upper deck, including the iconic on-board lounge for First Class and Business Class passengers. Airbus itself employs around 10,000 people in the UK, and Emirates’ announcement last year of a further 50 new A380s guarantees those jobs for many years to come.

The daily A380 service will replace the existing afternoon Boeing 777-300ER flight EK 009, providing customers with an additional 9700 seats per month in both directions.
Emirates passengers flying the A380 will have access to a spacious aircraft, with a cabin that is two-and-a-half feet wider than a Boeing 777; experience a peaceful journey in the world’s quietest long-range jet; use the on-board Wi-Fi; indulge in world-class food and be entertained by the award-winning ice system with over 1,600 channels of entertainment.

Emirates has the world’s largest A380 fleet with 47 of these aircraft serving 27 global destinations.