Karachi / DUBAI, – 23rd October 2013 – Emirates SkyCargo, the freight division of Emirates, has bolstered its position as a leading global player in air cargo industry by winning the ‘Overall Carrier of the Year’ award at the Payload Asia Awards 2013. 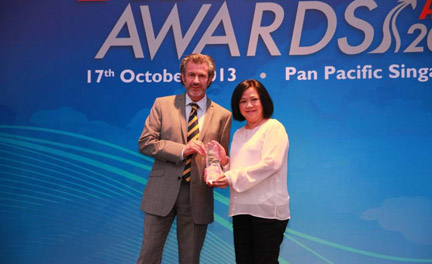 The award was accepted by Noryate Bte Abdul Rahman, Emirates Cargo Manager, Singapore, on behalf of Emirates SkyCargo, at a gala dinner which took place on the side lines of the Air Cargo & Logistics Asia 2013 Conference & Exhibition held in Singapore, a biennial trade event for the air cargo, logistics and e-Commerce industry.

“We are honoured to have been named Overall Carrier of the Year and would like to thank the readers, many of whom are our customers, for voting for us,” said Nabil Sultan, Emirates Divisional Senior Vice President, Cargo. “This award not only recognises the excellence of our operations, but also the commitment and support from our teams throughout our global network.”

Emirates was presented the accolade after being shortlisted by a panel of judges, and being voted the best in the category by Payload Asia readers. Criteria for the award included the carrier’s network coverage and development strategy, operational performance in 2012, customer service and product innovations, as well as market leadership, responsiveness and adaptability.

Emirates’ 206-strong fleet, one of the youngest in the skies, serves 135 destinations in 76 countries on six continents. Emirates SkyCargo operates 12 freighters (two Boeing 747-400 ERFs and 10 777Fs). Scheduled freighter services now operate to 43 destinations around the world.

In the 2012-13 financial year, Emirates SkyCargo carried 2.1 million tonnes of cargo across its network, contributing 15 per cent – US$ 2.8 billion – of the airline’s total transport revenue.