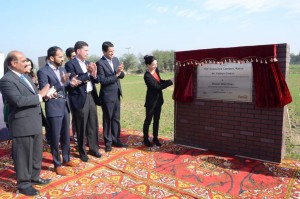 The TCF Coca-Cola Campus Kasur will be the second school established by The Coca Cola Company with TCF in Pakistan. A total of US$ 165,000will be invested to build the school premises and Coca-Cola will incur the operational cost for the first three years. The TCF Coca-Cola Campus is a collaborative partnership between TCF & Coca-Cola Pakistan that aims to provide quality education to children for as little as 10 cents a month.

While addressing the guests at the ceremony, Rizwan U. Khan, General Manager, The Coca-Cola Export Corporation, Pakistan and Afghanistan said “This school will empower generations to come and also serve as an example to other corporations to be sound corporate citizens by investing in the future of Pakistan. Coca-Cola believes in strengthening the communities where we operate, because our business will only be sustainable if the communities around us are prospering.”

“The Citizens Foundation believes that every child has the right to a quality education. Our vision is to use education as a means to removing barriers of class and privilege and creating agents of positive social change. Investments such as the TCF Coca Cola Campus serve as enduring examples of how businesses can help accomplish this vision.” said Zia Akhter Abbas, Vice President at The Citizens Foundation.

Ms. Casson further stated, “The Coca-Cola Company reiterates their commitment towards Pakistan as we see a bright future for the country. This school will further establish our position as a Company that is continuously striving to earn its social license.”

Coca-Cola partnered with TCF in 2011 and built a fully functional state-of-the-art school that provides quality education to 183 students. Coca-Cola has an extensive CSR Portfolio which focuses on environment, sustainable agriculture, water stewardship and women empowerment.