HBL granted license to setup a branch in China

Karachi: April 19, 2016: HBL is proud to be the first bank from Pakistan to receive a license for setting up a branch in China. It is also the first South Asian bank to get the permission to set up its banking operations in Urumqi, the largest city in the province of Xinjiang, which borders Pakistan along the traditional Silk Route. Urumqi is a growing commercial and trade center and the regional hub for the Belt and Road Initiative in Central Asia. 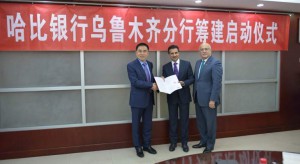 To mark this occasion a special ceremony was held at the office of CBRC Xinjiang in Urumqi. Speaking on the occasion Chairman HBL, Mr. Sultan Ali Allana said, “We are extremely proud to have been granted a license to establish our branch operations in China. This is a moment of great happiness, and a reflection of the Bank’s regional and global standing. We are grateful to the banking and regulatory authorities of China and Pakistan for reposing their confidence in HBL.”

He further added, “It is a historic occasion and we are confident that it will pave the way for greater collaboration between Pakistan and China. HBL Urumqi branch will be a cornerstone of CPEC, which will Insha’Allah not only contribute to trade and commerce between the two countries, but will also become a conduit of progress and development for the region and its people in times to come.”

Also present at the occasion, President and CEO HBL, Mr. Nauman K. Dar said, “Pakistan and China have had strong political ties for over 60 years and the economic relationship is reaching new heights with the launch of CPEC. We at HBL strongly believe in the importance of financial cooperation and the role that HBL has to play in promoting trade and commerce between China and Pakistan. We feel very proud today as with the permission to operate in China we progress towards economic growth and prosperity”

With the opening of the China branch, HBL will be the only bank to have a footprint in North West China, Central Asia, Southeast Asia and East Africa, and will be positioned to promote trade and investment between these geographical regions, as well as China and Pakistan.

HBL is the largest bank in Pakistan with over 1,700 branches, 1,900 ATMs, and a customer base exceeding eight and a half million.  It has presence in over 25 countries across four continents.