Karachi, October 1, 2014: Peek Freans Sooper, the number one selling biscuit brand of Pakistan, creates history by becoming the first biscuit brand with sales over the unprecedented Rs. 11 billion mark. The coveted milestone is another feather to the hat of the brand that not only has the biggest market share in the plain sweet segment at 37 percent, according to the AC Nielsen retail audit, but it is also the highest contributing brand of English Biscuit Manufacturers (Pvt) Limited (EBM), the country’s leading biscuit manufacturer. 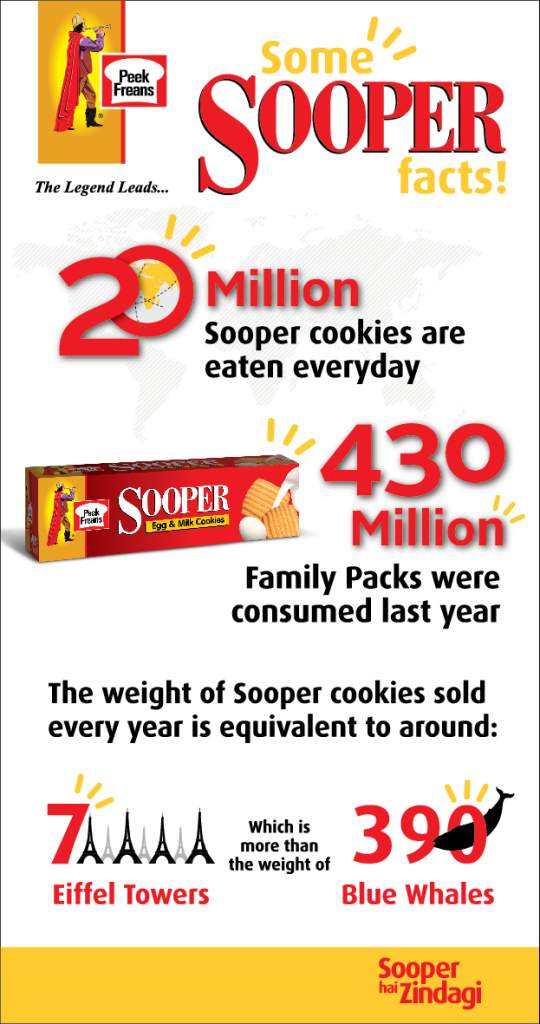 Commenting on achieving this milestone, Zulfiqar Ali Ansari, Head of Marketing at EBM said, “It is a moment of pride for EBM to be the parent company of Pakistan’s number one selling biscuit. The secret of Sooper’s success is the continuous innovation and adherence to strict quality standards maintained at EBM. Almost every company has tried replicating Sooper to climb on its success bandwagon, but has been unable to match the same taste and quality. At present, Sooper is exported to 13 countries and we plan on increasing that number soon.”

Launched in 1996, Sooper was the first Egg & Milk cookie, and since then there has been no turning back. Developed after intensive research, it is a plain sweet biscuit with a unique texture that delivers a melt-in-the-mouth feeling. In 2013, a new flavor, Peek Freans Sooper Elaichi (cardamon) was introduced. This too was very well received by consumers and since its launch, the new flavor has contributed significantly towards the Sooper portfolio’s overall growth.

Peek Freans Sooper enjoys a universal taste appeal and is consumed by all cross-sections of society. Almost 20 million Sooper cookies are consumed every day and 430 million family packs were sold last year. Sooper was also elected the 2nd most favourite brand during the Brand Elections conducted by MEMRB Research agency across Pakistan.

English Biscuit Manufacturers (Private) Limited, the maker of Peek Freans biscuits, was established in 1967 as the first manufacturer of wholesome, hygienic packaged biscuits in Pakistan. For over 45 years, EBM has been a symbol of trust and confidence for consumers, making it the leading biscuit manufacturer of Pakistan. EBM is the first biscuit company in Pakistan to have achieved ISO 14001, ISO 9001 and HACCP certifications. The Peek Freans brand also enjoys the internationally acclaimed Superbrands status.